By Artem Chernov. Full article(in Russian)
There are shots that begin to pursue a photo editor at a certain point. You receive them from friends or fellow journalists, or even from less experienced photojournalist colleagues. “Look, cool, huh?” – they say. But they do not understand your total silence in response. Often, you see those shots in the headings like “Day in Photos” or “Photo of the day”, and even in our own headings. They get there, because there will always be people who will see these pictures for the first time. Actually, these people – the vast majority. And for them it would be cool, or interesting, or funny. For them it will be totally new.
Nevertheless, I’m talking about the shots, who have a number of twin sisters. Sometimes dozens of twins. Sometimes hundreds. 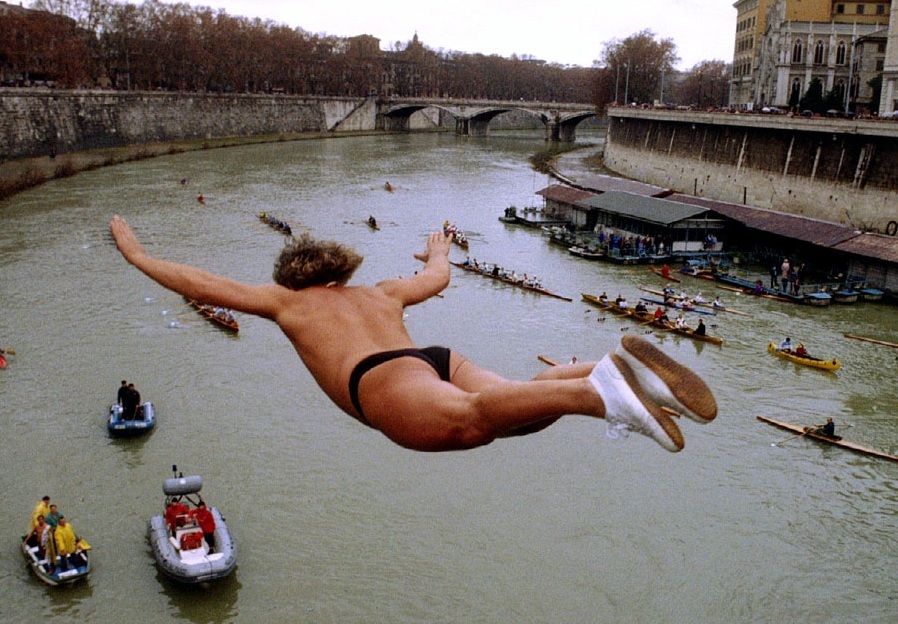 I decided to write about these shots when, in December, I remembered a flying man in white sneakers. I thought that I am pretty sure that I will see him again January 1, 2013. And I was right.
I saw this picture again. Many of them: three twin photographs appeared on three different world agencies. Last years, it was usually just one agency, may be two.
This tradition is 20 years old. Every year, on January 1, white sneakers jump into the news from the bridge over the Tiber in Rome. The composition is always identical: strongly built man in shorts and white tennis shoes, as if lying on his stomach on the surface of the muddy river between the sma-a-a-a-l boats. The color of swimming trunks differ from year to year, the color of shoes and water – never.

The shooting point, the angle, the phase of the jump, they are always the same, although you see completely different pictures.
Over the years, the man’s body is covered with more tattoos and hair. In captions the man is usually mentioned as either Maurizio Palmulli or Giuseppe Palmulli. One time, back in 1997, the agency AR suddenly called him Aldo Dzhomeri. It was the only year when Giuseppe Maurizio Palmulli (this is actually the full name of the jumper) had bright striped trunks. It was totally unexpected. I can imagine how my fellow photo editors were surprised on that January day – “Which Dzhomeri? Why Dzhomeri? How do we start the year without Palmulli?” Then they recognized him by muscles on his back and relaxed. The tradition has survived.

The jumper did not change the colors anymore. He always used the same colors and nobody confused his family name. The agencies just choose one of his first names according to their tastes. He never showed his face! All these years you could see only his back, calves, thighs, buttocks and slippers, and a tuft of blond hair. I firmly remember the hero for the last 6 years .
Why photographers avoid other points of shooting Giuseppe? Why there is never a piece of the bridge in the lower right corner? I think it would underscore the depth of space, would increase the sense of movement (see picture of 1999). The same awkward shooting solution consistently repeats itself from January to January. Sometimes it’s sunny in Rome on January 1, then the feeling of space is a bit better.

I counted at least 11 (!) different authors, strictly following the canon during many years, in any weather. 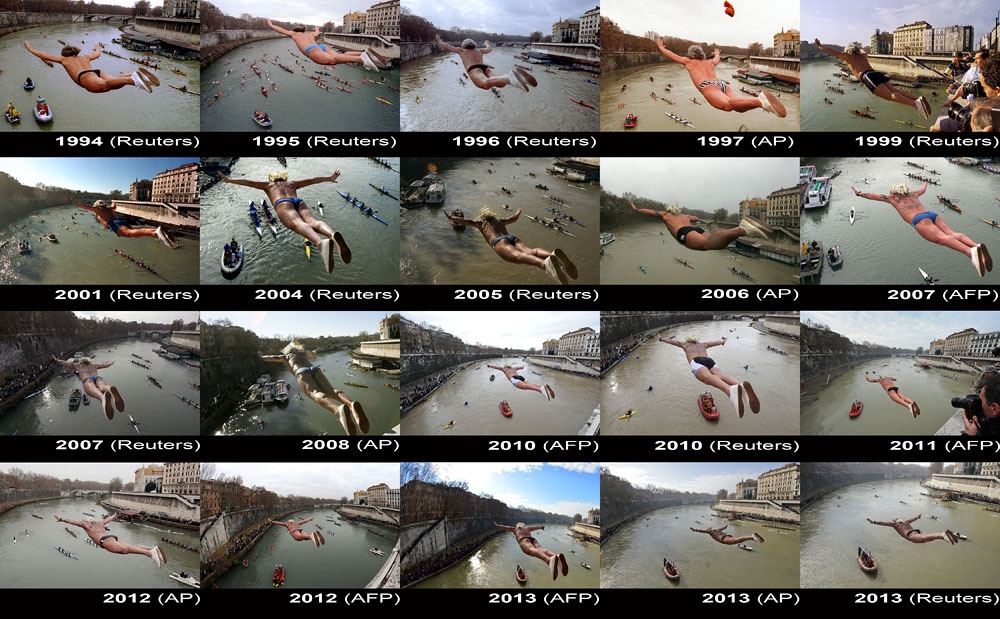 During New Year holidays, I was able to slowly go after my curiosity and dug into the archives looking for the very first picture of the jumper.

If so, the founder of the “Palmulli’s canon” should be considered Luciano Mellache, photographer agency Reuters.